My son is planning his future after school. He still has a couple of more years to go before university studies can become reality, but the topic is already present in his mind. Science or art, or maybe both? What would be his thing? Something that he would like and something that would motivate him enough.

I support him to the best of my ability, but I also wonder how far he can implement his future plans before the effects of the climate and ecological crises on the society around him make implementation more difficult. How long might he have time to enjoy the work he has studied for? Will he get to feel experienced in his work: this is my job, this is what I know and this is what I’m good at? Or, will the original plans have to be abandoned at some point in order to focus on caring for more basic needs in an increasingly challenging environment of the surrounding society? Or, could a future scenario come true where things are more or less under control? Where life goes on, even though the situation is very new compared to the present, and the challenges are substantial. This last one would be a scenario where my son could still experience satisfaction in his work, whatever it might be, and also get a good chance at a happy life together with his loved ones.

Some see the darkest scenarios as part of a doomsday cult. I would not want to believe them. But I also cannot believe that life would not become vastly more challenging in the coming decades even in the places around the world where it is relatively easy today.

It is not easy to be the parent of an adolescent planning for his future right now, as we face more and more signs and consequences of the climate and ecological crises, while genuine ambition for change at the level of politicians and other power elites remains around zero. Parents of all children are vulnerable to this contradiction, but parenting of adolescents makes the conflict more acute, as teenagers are often planning for their future in a rather active way.

Many of us parents block these thoughts out, not necessarily consciously, but still resolutely. Often because thinking about these issues is simply too difficult, too hurtful, and completely contrary to the basic idea of ​​parenting: to protect our children, to hope for the best possible future for them, and to support them for a good start in life. How can all this be done if one believes and is aware that our lives on this planet will become more difficult, rather than easier for the next generation?

In the age-old chain of generations, the next generation has generally done better by different standards than the previous one. In difficult circumstances, parents have also made sacrifices in their own lives so that their children could reach a better life. How can this happen in today's world? In principle, the magnitude of future changes applies to both prosperous Finland and the poor countries of the global South, such as India, although in practice, the level of challenges may be very different. Or maybe not, after all? Perhaps one is no longer lucky to be born in Europe if global crises create global distress.

Because we as parents today do not know what kind of tomorrow our children will face, it is also really difficult for us to give, and dare to give them, the support they would need. Changes in society have accelerated as history has progressed towards the present day, but the current situation with regard to change is completely exceptional. Science predicts enormous changes due to the crises in the coming decades, but their concrete effects remain in the dark, above all because few people want to think about them. In particular, very few decision-makers openly do so.

Although the basic principle behind ​​school education is to teach children and young people useful skills and knowledge for life, kids have not always found it so useful. However, especially right now, I do not think that school is able to teach enough new skills and knowledge to prepare today’s children and youth adequately for the challenges of their future. As long as society broadly refuses to be aware of the true state of affairs, it will be impossible for it to prepare for the future, at least at an adequate level, and by generating and passing on the necessary know-how to that next generation.

The irony, of course, is that the generation of parents of current children and young people is precisely the one that in much of the world has lived through the age of biosphere destruction, encouraged by the capitalist system to consume like there was no tomorrow - not even our children’s tomorrow. Half of the CO2 emissions since the industrial revolution have been emitted in the last 30 years. Instead of accepting our involvement in this, rolling up our sleeves and taking action now, while giving up some of the privileges to consume that do not even belong to us, we are trying to push the whole thing out of our minds because it is too big and difficult. There are those in power in society who are consciously supporting this rejection of truth, and those that are also trying to create an idea of the futility and impossibility of change, while arguing that it is already too late.

But there is another way. Science tells us that it is not too late to change direction. We can still try to make the world easier for the next generation. Not easier than the world people in the global North have until now been able to experience, but still far easier than the world according to scientific “business as usual” scenarios. While this requires both much more awareness and empowerment of ordinary citizens, I am convinced that our generation of parents will still be able to influence the world for the better. Awareness and empowerment actually go hand in hand because empowerment allows for increasing awareness, and increasing and acknowledged awareness creates a desire and a need for action. We can talk of collective sacrifice for the benefit of the next generation. This is one of the ancient ways to act as parents, this time around as climate parents, wherever parents are fortunate enough to afford such a role. To actively, with love and rage, fight for the future of our children, by being part of the climate and environmental movement, while giving at least some coping abilities to our children. Or perhaps, action can even make us climate parents to ourselves, better matching our values to what we do?

While active hope arises from action, a certain kind of lightness can result from not having to know what tomorrow will bring when it comes. Life goes on. 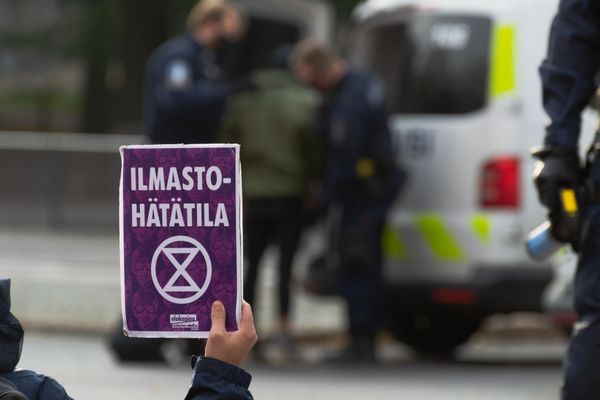