This past year, climate protests were hard to miss: school children have been on strike around the world, also assembling on the steps of the parliament building in Helsinki, while thousands of citizens across Europe have committed mass acts of civil disobedience in the name of Extinction Rebellion.

While the forms of protest are diverse, at their heart is a scientific issue: as expressed by the Intergovernmental Panel on Climate Change (IPCC), anthropogenic climate change is an urgent and accelerating threat, to which our collective response has been negligent. This may seem odd: children are striking and adults are willing to face arrest, holding copies of a scientific report. And it raises a question for scientists: what is our role?

The scientific method calls for objectivity: as scientists, we try to avoid biases, and are careful to be seen as impartial. Scientists are discouraged from venturing into political discussions, and certainly, from taking “extreme” positions: the model scientist takes a balanced view, and does not take a stand.

However, while the scientific evidence for impending catastrophe is clear, the definition of what are balanced and extreme positions is not. As scientists, we may be equipped to look at the facts in front of us – and the reality is, overwhelmingly, that our response to climate change is wholly inadequate.

Measured even against the conservative forecasts of the IPCC, what we have accepted as “normal” behavior deserves to be called extreme: it is destructive, shortsighted, and dangerous. History is littered with painful examples in which the majority has erred badly. And while we don’t have the benefit of hindsight, there is good evidence before us to conclude that we are about to make the same mistake. To us, the reasonable and necessary response is to examine the facts, rather than blindly follow the majority for fear of being perceived as radical.

Of course, scientists have been warning of the coming climate catastrophe for decades. On the 40th anniversary of the first world climate conference, more than 10,000 scientists have just added their names to an article that describes the catastrophic effects of our collective inaction in stark terms. However, we argue that the issuing of warnings within the academic world is not sufficient. If it remains inconsequential, this practice may only be a way of washing our hands off our true responsibility.

The public is looking not just at what we say, but also at our actions. Using a calm voice to say “fire” is ineffective and actually irresponsible. And even when we shout “fire!”, we are still sending mixed messages, if we then act as though nothing happened. There is ample research to show that, when the truth is inconvenient or even painful (as any appropriate response to the climate crisis will invariably be), hearing mixed messages results in ignoring that truth.

We feel that a scientist’s job is more than pure research. The full impact of the climate crisis will only be apparent at a time when it becomes catastrophic and impossible to avert or mitigate. In this situation, our job is also to be canaries in the coal mine. Let us be clear: this is the role that society has trained, equipped and entrusted us to do, there is nobody else who is equipped or trained for it. And, if humanity is not changing course now, the failure to clearly sound the alarm will be our sole responsibility.

We are aware that we each have different capacities to act. Civil disobedience is not for everyone, and there are many different, meaningful ways to be active. As colleagues, and as fellow humans, we are asking only that you do what you feel able to do, to bring your actions in line with what you understand to be true. We trust that it will be enough, but we also believe that, in this unprecedented crisis, nothing less will do.

Till Sawala, Academy of Finland Research Fellow at the Department of Physics, University of Helsinki
Minna Kanerva, social scientist and postdoc at artec, Sustainability Research Center, University of Bremen, Germany 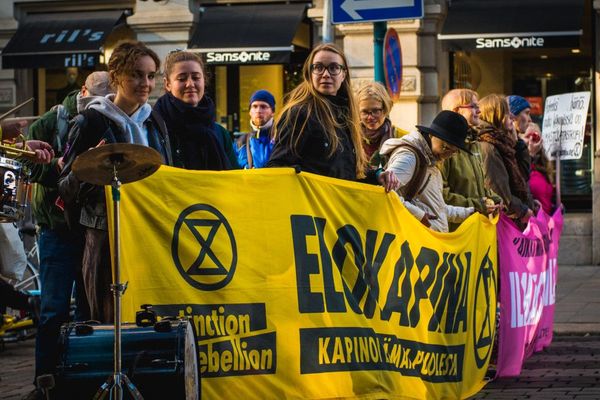